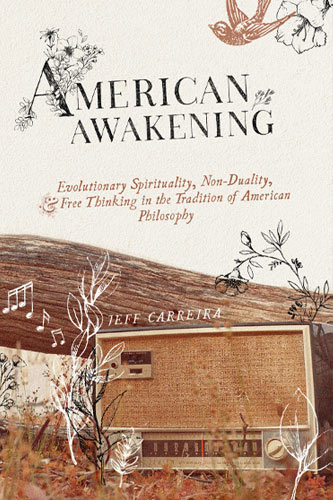 Evolutionary Spirituality, Non-Duality, and Free Thinking in the Tradition of American Philosophy
by Jeff Carreira
Buying Options
Paperback
Kindle
Audiobook
*As an Amazon Associate I earn from qualifying purchases.*

In 'American Awakening: Evolutionary Spirituality, Non-Duality, and Free Thinking in the Tradition of American Philosophy', meditation teacher and mystical philosopher Jeff Carreira takes you on a journey through the revolutionary and evolutionary wisdom of American philosophy. From Transcendentalism in the mid 19th century, through the rise of Pragmatism, right up to the late 20th century ideas of Richard Rorty, you will discover a radical understanding of reality based in a deep recognition of the inherent unity of mind and matter. You will be amazed to see how many of the notions of contemporary alternative spirituality were incubated and developed by some of America’s most prominent thinkers. Complex and subtle conceptions are elucidated clearly and simply so that you leave the reading of this book feeling enlightened and enriched. This is not philosophy the way you might have learned it in school. This is an exciting adventure through the lives and thoughts of some extraordinary individuals and an exploration of the deeply mysterious nature of life. The story you will discover in this book reveals a seldom recognized American tradition of spiritual enlightenment.

When I speak to people — including Americans — about American philosophy, people often look back at me somewhat bewildered. Americans are not known for their philosophy. And yet the truth is that we do have one, and it contains a magnificent vision of a universe that grows as one dynamically interconnected whole. We are not separate from the universe any more than our mouths are separate from our faces. We grew out of the universe like a leaf grows out of a tree.

This book presents an awe-inspiring vision of reality that was initiated by Ralph Waldo Emerson and later expanded upon in the philosophy of pragmatism. As you read, you will discover a new way of thinking about reality, not as a collection of interconnected parts, but as single living event that has grown - from the inside and out — since before time.

Jeff Carreira
Jeff Carreira is an author, mystical philosopher, artist and meditation teacher. Thirty years ago he dedicated himself entirely to the focused pursuit of spiritual awakening. He began teaching meditation and awakening fifteen years ago, and today supports people from around the world to share the fruits and blessings of their own spiritual path. His novels use the powerful medium of story to illuminate the mysterious ways in which we can awaken to the invisible realms and hidden truths that always lie just beyond the familiar world around us.
Learn More
More Books by Jeff Carreira
New Release

How to articulate your value and sell your products

The Path of Cosmic Consciousness

A Practical Guide to Higher Dimensions of Reality

The Mystery of Collective Awakening

Questioning Identity and Connecting in Oneness

The Miracle of Meditation Oracle

The Miracle of Meditation Oracle Guidebook

A tool of divination for your spiritual evolution

How To Be Free

How to Create Transformative Programs

The Reflections Series Collection One

The Courageous Freedom of Anaïs Nin

A Guide to the First Seven Books of The Reflections Series

How To Think About How You Think

Identity, Philosophical Inquiry, and the Risk of Thinking You Know

The Battle of Science and Spirituality

Reflections on the History of Western Philosophy

How to Successfully Gather and Nurture Your Virtual Tribe

The Path of Spiritual Breakthrough

From Awakening to Cosmic Awareness

Reflections on the spiritual vision of Ralph Waldo Emerson