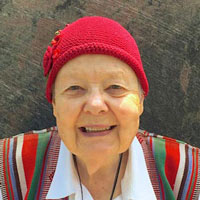 40 years ago Dorothy Walters experienced an unexpected life-altering Kundalini Awakening. Since that Dorothy has devoted herself to sharing her understanding of this powerful form of awakening and the role that it plays in the larger shift in consciousness on this planet.

Dorothy Walters, PHD, taught college level English and American literature as well as Women's Studies in various Midwestern universities for most of her professional life. In 1981, at age 53, she experienced spontaneous Kundalini awakening, with little or no prior knowledge or experience in such things as yoga or meditation. This event was the beginning of a long process, which led her through many subsequent episodes of ecstasy and pain as the energies sought to balance and integrate within.

This ongoing process has continued in one form or another up to the present, and thus it has been the focus of her attention, in terms of both her own continuing experience and personal research on the Kundalini phenomenon. She had no external guru or teacher to guide her on this most intimate journey, but rather relied on her own inner guru plus a few printed texts. She has written two books on the experience of kundalini and has had several volumes of her mystical poetry published. Dorothy is 94 years old and continues to write mystical poetry and to help those who are experiencing Kundalini awakening. She is firmly convinced that Kundalini is the engine that will take us to the next stage of human evolution.

Poems of Ecstasy and Transfiguration

Some Kiss We Want

The god/goddess in Your Body