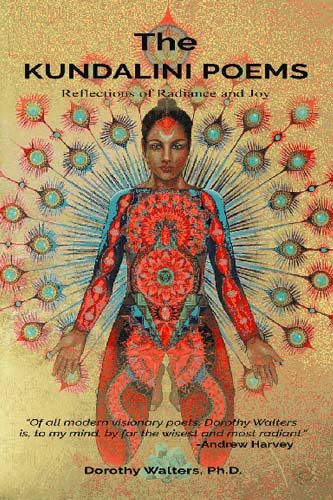 Dorothy Walters is widely recognized as one of today’s most ecstatic and illumined kundalini poets. Her work is simultaneously authoritative and abandoned, with the power to uplift, transport, and even awaken readers to the extraordinary splendor of the Divine. In this volume, she shares the work of her lifetime of contemplation, offering an extensive set of poems that, as she describes, arrives in a special way, “pouring forth from the Divine Source over a short period of time” during which she became simply the vessel in which they were received.

Walters is convinced that universal awakening is possible and indeed is now occurring over the globe through similar transformations. It is her wish that the poems in this volume will provide inspiration and guidance to all whose hearts are opening to divine love as well as those who long for such experience.

Dorothy Walters
Dorothy Walters, PHD, taught college level English and American literature as well as Women's Studies in various Midwestern universities for most of her professional life. In 1981, at age 53, she experienced spontaneous Kundalini awakening, with little or no prior knowledge or experience in such things as yoga or meditation. This event was the beginning of a long process, which led her through many subsequent episodes of ecstasy and pain as the energies sought to balance and integrate within. This ongoing process has continued in one form or another up to the present, and thus it has been the focus of her attention, in terms of both her own continuing experience and personal research on the Kundalini phenomenon. She had no external guru or teacher to guide her on this most intimate journey, but rather relied on her own inner guru plus a few printed texts. She has written two books on the experience of kundalini and has had several volumes of her mystical poetry published. Dorothy is 94 years old and continues to write mystical poetry and to help those who are experiencing Kundalini awakening. She is firmly convinced that Kundalini is the engine that will take us to the next stage of human evolution.
Learn More
More Books by Dorothy Walters

Poems of Ecstasy and Transfiguration

Some Kiss We Want

The god/goddess in Your Body