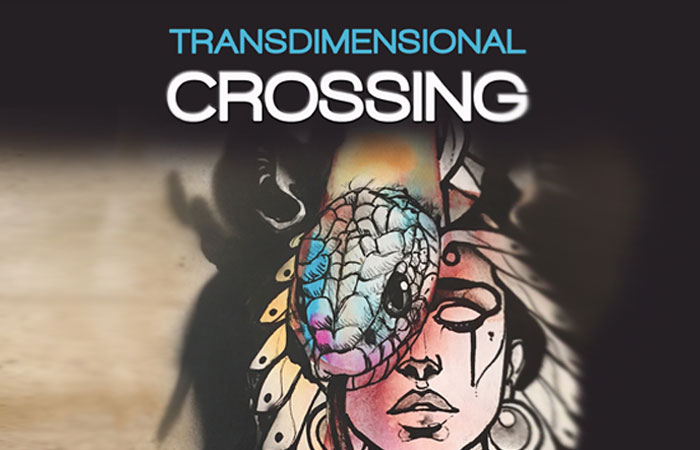 I decided to write my first work of fiction because I’ve come to believe we are the authors of reality and a work of fiction might convey that fact better than writing about it in nonfiction prose.

I used a form of spontaneous writing to create Transdimensional Crossing. I wrote as quickly as I could without editing or filtering what landed on the page. The work took place over eight months, and there were a few gaps in writing that lasted for a few weeks at a time. When I came back to the book after having been away for a time, I read only the last few pages to remind myself where I had left off. If I didn’t need to remind myself where I’d left off, I didn’t go back and read anything at all before starting again.

Once the first draft was complete, I sent it to a friend to read and edit for consistency. I then had it proofed and only then did I read through the whole book myself. The book you are about to read has been edited very little from the way it originally appeared as I wrote feverishly over those eight months.

My choice to work in this spontaneous way was inspired by my admiration for the American philosopher and psychologist William James, as well as the present-day historian of religion Jeffrey J. Kripal and the late science fiction writer Philip K. Dick.

In the latter part of his life, Phillip K. Dick experienced a profound spiritual opening in which he claims a pink laser beam from an orbiting extraterrestrial satellite struck him and bestowed access to tremendous volumes of knowledge upon him. With his newly enhanced powers of perception, Dick saw his son was gravely ill and rushed him to the hospital. The doctors didn’t initially take him seriously, but upon examining the boy discovered he was ill in exactly the way Dick had described.

After his spiritual awakening, Dick realized all his earlier novels contained hidden messages as if his own written works were encoded with wisdom even he was not aware of. He embarked on an effort to reread his own novels to uncover the secret meanings they contained. During the last years of his life, Dick wrote an enormous number of pages of an Exegesis in which he explored the vision of reality he was discovering in his own novels.

I started reading about Dick’s awakening and retrospective insights at about the same time I was reading Jeffrey J. Kripal’s book Authors of the Impossible. Kripal writes about how certain authors of fantastical fiction and nonfiction are not just speculating about possibilities. They’re actually sensing the whispering edge of futures not yet available to us.

My discovery of Dick’s Exegesis and Kripal’s Authors of the Impossible both occurred in the con- text of my love for the American philosopher and psychologist William James. He did pioneering work exploring spontaneous writing at Harvard University over one hundred years ago.

James’ fascination with what he called automatic writing was born because he and his brother, the famous novelist Henry James, were seeking direct access to the mind of the Absolute. These unusual brothers believed the conditioned structures of the conscious mind limited their awareness to the human sphere. They were convinced if they could be released from habitual patterns of thought and feeling, they could gain direct access to the universal consciousness that lay beyond their current experience.

Their vehicle for releasing conditioning was inhaling nitrous oxide, more commonly known as laughing gas. The brothers would inhale the gas after having positioned themselves in such a way that when they passed out, they would land on their beds. They believed this method completely released them from the limits of the conditioned mind and was an entryway to Absolute awareness.

The set up for these journeys to the Absolute also included a table with a pen and a notebook right in front of them so as they gradually returned to normal consciousness, they could write down the first things that came to mind. They believed these messages would give them direct access to the wisdom of oblivion.

In a paper entitled The Subjective Effects of Nitrous Oxide James tells us the most coherent message he received in this way was the statement, There are no differences but differences of degree between different degrees of difference and no difference.

What he experienced was, in his own words, that every opposition, among whatsoever things, vanishes in a higher unity in which it is based; that all contradictions, so-called, are of a common kind; that unbroken continuity is of the essence of being; and that we are literally in the midst of an infinite, to perceive the existence of which is the utmost we can attain.

After filling numerous notebooks with messages that were largely unintelligible James gave up on this particular avenue of pursuit, but later he would continue working with automatic writing as a professor of psychology. One of his students was Gertrude Stein who would famously encourage James Joyce and others to use a spontaneous style of writing while creating their masterpieces.

I was drawn to write my book spontaneously because I believe it creates wiggle room that allows a story that wants to be written to appear unimpeded. And perhaps such a story would allow messages from a cosmic source to emerge through the otherwise too densely packed ideas of my mind.

My experience of writing this way was that the story seemed to write itself. I started with only an idea about the first scene. The experience Jack has while driving to work is an experience I had many years ago under identical circumstances. Conveying that experience was the only thing I had in mind when I started writing the story. Everything else – every character, every action, every scene – emerged through my fingers as I wrote, sometimes seemingly without the involvement of my mind at all.

In one particularly dramatic moment, I was writing the scene where Melinda leaves Jack on the train. As I was writing out the description of Melinda walking away, and then Jack running after her, I had decided Melinda would run into the crowd, and the rest of the chapter would involve a chase. Except that’s not what happened. My mind was telling my fingers to type about Melinda running off, but my fingers actually typed that she stopped, turned back, and walked toward Jack.

The more I wrote, and the more I surrendered to the story that wanted to be written, the more I discovered a story that seemed to have less and less to do with me. It was thrilling, and it never felt like work.

It was not that I was uninvolved. I was a full participant in this birthing process, my interests and passions were shaping and influencing everything.

The people, events, and scenes in the story were drawn directly from my life. Events from my past showed up in thinly veiled disguises, and my current friends and acquaintances seemed to wink up at me as they temporarily inhabited the characters.

Who was writing this book? It was writing itself, but it was doing it through me. The final book, the one I hope you just read, is a child of many parents. It emerged through my efforts, but it was not created in my mind. I intend to examine it with the curiosity of Phillip K. Dick to discover any hidden wisdom it might contain. I invite you to do the same.