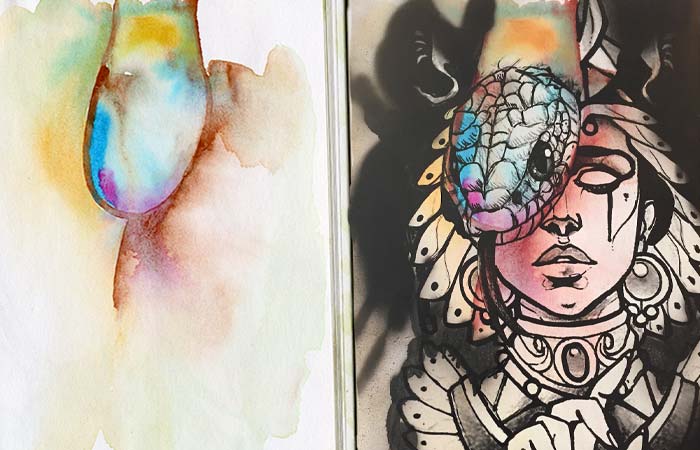 It seems that sometimes a cover initiates a novel. That was the case with my first novel Transdimensional Crossing. You see, the cover began to create itself a year or two before I even thought about writing a novel. Which is very fitting, given that so much of what happens in the novel occurs as a result of a similar retrocausality.

A few years before I even had the intention to write a novel, I painted a watercolor image that eventually was used as the foundation of the cover of the novel. I created that painting to depict a series of visions I had that involved a dream, or perhaps a memory, of a time when I was engaged in spiritual rites of passage with an Egyptian priestess with a snake tattoo. The watercolor painting depicts the head of the snake tattoo. That tattoo eventually became a central character in the novel.

Soon after completing the painting, and still long before I ever imagined writing this novel, I felt compelled to make a large print of it and give it to a young artist friend of mine. I told him about the visions that inspired the painting and asked if he would illustrate over the watercolor image.

It was still months before I decided to start writing Transdimensional Crossing and it was only once I had started that I discovered that the priestess from my Egyptian visions had found her way into the story. It was only once the novel began to reveal itself in my writing, that I realized that my friend’s illustration had been created to be the cover of a book that hadn’t been conceived of yet.

The notion of retrocausality describes situations where something in the present affects the past. Throughout most of Western philosophy it has been assumed that causality can only occur in one direction – from the past and into the future.

Something happening now can only affect things happening later. Unfortunately, some perplexing discoveries of quantum physics seem to indicate that retrocausality happens at least at the quantum level. This has made people begin to reconsider the assumption that causality only happens in the forward direction of time.
Perhaps needing and creating my book cover was the cause of the visions that led to the painting that became the cover?

Retrocausality is one of the ideas that I want to explore in my novels. Do things only affect future events, or can they also change the past?

There is one last thing I want to add about the cover of Transdimensional Crossing. I see the cover as a powerful metaphor for reality. You see, I believe that underneath the world as we experience it, there is an ambiguously defined field of energetic possibilities that are constantly ready to be pulled up into existence. From that field of infinite possibility, we recognize things and make distinctions that define them. By making these distinctions we create the reality that we experience. In effect, we illustrate the world into manifestation.

I could take the same watercolor painting and give it to a different illustrator and they could create a completely different image out of the colors. In the same way we can create a different world, but changing how we illustrate our experience of reality. Unfortunately, once we illustrate the world into existence, it is hard to see it any other way. But if we try, we can let go of all the lines and distinctions we’ve drawn and return our consciousness to the pure energetic field of possibility from which it all came. Then we are free to create whatever world we want.